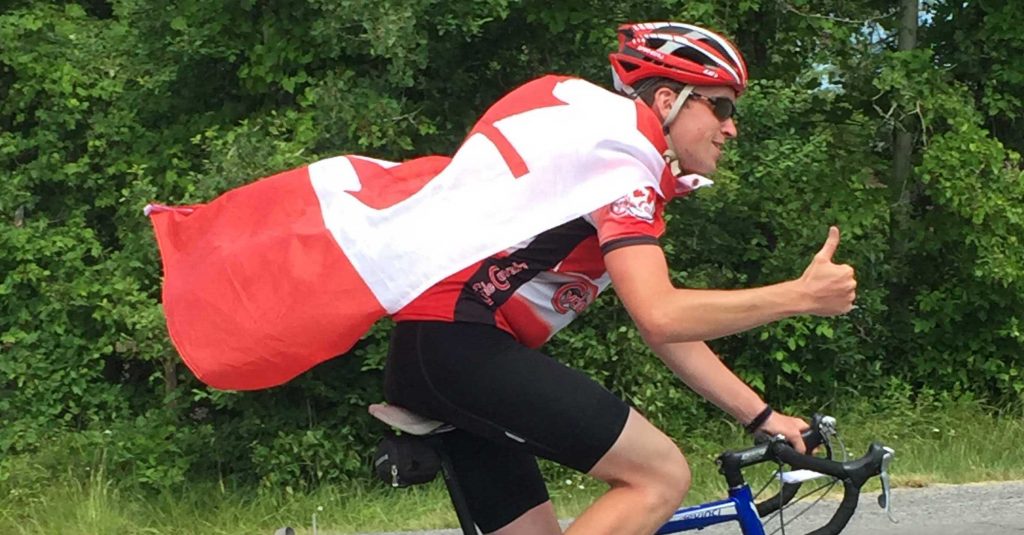 Here’s a transcript of the recording.

Host: Well if you are looking to get out for some fresh air and exercise, biking is a good COVID-19 solution. In places like New York City there’s been a big jump in cycling and now with spring slowly arriving more people are riding here in Alberta as well. Adam Gibson is a member of the Board with Tour du Canada, a Canadian cycling club. Hello!

Adam: Hi, how are you today?

Host: I’m well, thankyou. Now Adam, when did you notice more people going outside to bike?

Adam: I first noticed it shortly after the whole quarantine period got a lot more serious and we were out on some trails and kinda looking around and realizing that, yeah, these are a lot busier than what they typically were just even a couple of weeks ago.

Host: And even people wanting to join, for example, facebook biking groups and such?

Adam: Yeah, so that one’s been interesting there’s people been promoting riding but then there’s also people kind of pushing against riding because we obviously don’t want accidents to happen for medical resources to be taken away from those who have COVID, right?

Host: Hmm, so there’s a bit of a back and forth actually happening in the biking community?

Host: Yeah, but why would you, say, chose biking as an activity to get out?

Adam: I think it’s a great way to get outside, get some exercise. Right now, provided that you’re not doing anything too crazy, it’s fairly safe, so you don’t have to worry too much about being in too close contact with other people. Yeah, it’s really fun and great exercise.

Host: Is that why you would say suggest biking over walking because you can have more distance?

Adam: Partially, you get more of a sense of adventure with biking. In all fairness, just about anything you can do right now to be outside is a plus.

Host: I understand that you feel there are kind of mental health benefits to biking. How so?

Adam: Well, it really gives you a good sense of accomplishment, especially for those of us right now who might not be working or laid off. So going out for a bike ride is very rewarding, you get to have fun while doing it and you just get some really good exercise. So it’s a really good way to clear your head. And I know a lot of people, myself included, who, even when riding isn’t affected by COVID, use it to de-stress.

Host: Yeah, for you personally, can you tell us what it’s meant for you to be able to get on your bike and go?

Adam: Oh, it’s been great. After a while everything just keeps stacking on top of each other and just to be able to escape the house that little bit and get out for a ride and also there’s not that much traffic right now. So it’s a really good chance to get out and explore your city.

Host: So, you’re finding that cyclists are able to follow the two metre distancing just because there’s less traffic going on in general?

Adam: Yes, you just have to watch on public paths that you give people enough space to get past one another.

Host: Yeah, has COVID-19 affected the professional cycling community at all?

Adam: Yes, so, I’m a pretty avid mountain biker as well and the big issue with that, at least in Ontario, is that a lot of the conservation areas where the trails are have all shut down, cos’ they were too busy with hikers and cyclists and whatnot. So people weren’t able to maintain the proper distances so they all had to shut down. And as a result of that if you only mountain bike, then you might be in a bit of a bind or if you only, if you are very passionate about racing for instance all those races have been cancelled. So you’re limited, there’s not that same motivation there to continue training when normally this is the time of year where you are getting outside to be able to do more to bring your fitness up that little bit more to prepare for race season

Host: We’ve heard similar issues in the running community and I’ve heard and I know that there have been a lot of things that people have brought in like quarantine races, people even running around their living rooms or backyards. Is there anything available for the biking community that can fill that void of no races and things coming up?

Adam: Yeah, so a really popular option is for people who have their bikes to set up on trainers – they’re basically stationary bikes. So you get to use your own bike. There are apps and online races through a programme called Zwift and that’s becoming very popular. So even in like Tour de France level cycling, those cyclists are all kind of going online to do a virtual race against one another.

Host: Hmm, very cool. Do you think this pandemic might have a long term effect in terms of people cycling more? We’re seeing an uptick now. Will that stay?

Adam: I really hope so, cos’ cycling is a really fun, enjoyable way to go out and get exercise. Unlike going to a gym you get excited for it, not, oh it’s something I have to go and do now. And the more people who are out riding then the better riding will be for everyone because if there’s more people out riding, more money can be dedicated to specific bike infrastructure and just make it more enjoyable.

Host: Hmm, ok. Well, we’ll be watching it. And thank you for this Adam.

Adam: Absolutely. Have a great day.

Host: You too. That was Adam Gibson. He is a member of the Board of Directors of Tour du Canada, a Canadian cycling club. The Government of Canada says people are allowed to go for bike rides as long as they stay two metres. . .