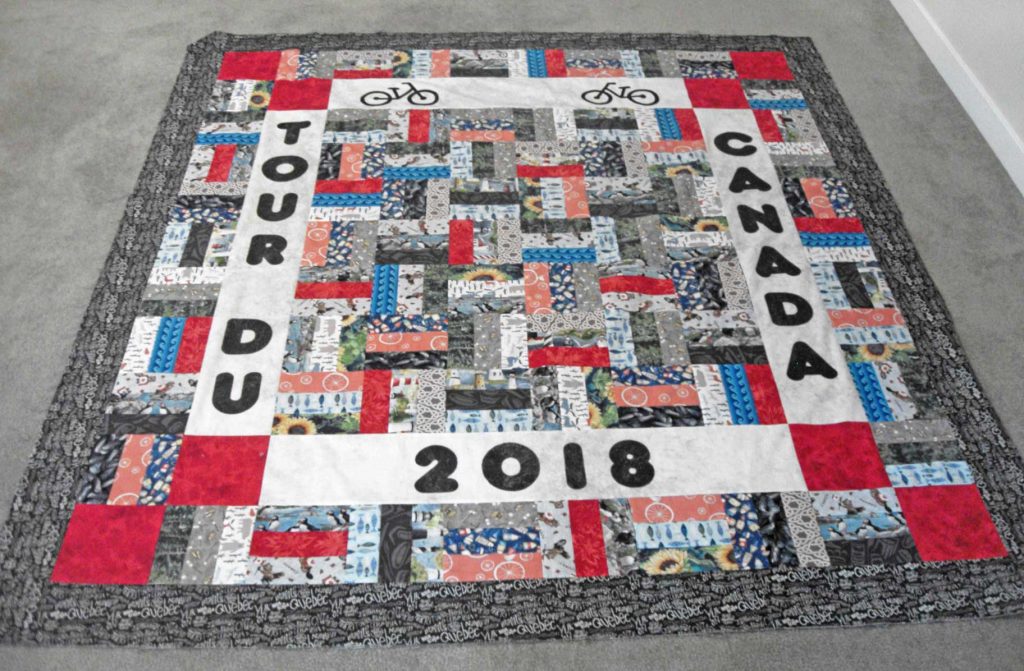 During her ride, Terry collected fabrics as she cycled across the country traveling from the west coast of Canada to the east coast. And since her ride, she has been busy creating a quilt to remember her accomplishment and the wonderful places she visited.

Prior to leaving my home province of Alberta, I purchased the light blue fabric with beavers holding the Canada flag and the word Canada on it.

Province number one, British Columbia – After our ride to Victoria, I had half an hour to run to a quilt store close to the hostel we were staying at. Me, being directionally impaired, this was quite the feat that I actually found the store and didn’t get lost. The grey/black native art fabric was purchased.

Province number two, Alberta – I did not purchase my fabric for AB until after the bike trip. I went to my local quilt shop in Airdrie and purchased the beige fabric with the animals on it, deer, bear, moose, etc.

Province number three, Saskatchewan – Upon our arrival to Regina, Ken and I rode the extra distance to the quilt shop where I purchased the sunflower material.

Province number four, Manitoba – Our travel through MB did not take us to, or through, any communities that there were quilt shops. I’m sure there are quilt shops in Winnipeg but our super long day of biking did not allow for any detours. Upon my arrival back in AB, my son went to the Fabricland in Brandon and through face time he showed me a variety of fabrics. I settled on the brown fabric with marshmallows and s’mores as this was a reminder of how much Ruedi loves marshmallows! Also, I purchased the black fabric with the names of all the provinces and territories on it. This fabric became the border on my quilt and the divider fabric on my table runner.

Province number six, Quebec – During our time in Quebec, I was told that Quebec does not have quilt stores as it is a reminder of the time when women had to make blankets out of necessity, for warmth. This was an oppresive time for them and they do not want to remember it. The art of quilting has not taken off like in other provinces. While in Quebec City, Mike asked his friend who lives there, where I could purchase fabric. I was directed to a fabric store. I set off by myself, which was a challenge to not get lost, and found the store. This store did not sell any cotton fabric, just knits and polyester. They directed me to a wool shop down the street. This shop sold high end wool but in the back corner of their shop they had about 20 bolts of fabric. There I was able to purchase the coral fabric with the circle and bird on it. To the store owner this circle reminded them of a spinning wheel for yarn. To me, this circle with the lines, reminds me of a bike wheel. This was the most expensive fabric I bought for my quilt.

Province number seven, New Brunswick – In Shediac, after Brian and Mike had their fill of seafood, we set off to the quilt shop. Upon entry into the store, I thought I was in the wrong place. The store was half full of work boots and work clothes. On the other side, was quilting material. What an interesting combination! I found the lighthouse and mussel fabric here. After having the fabric cut and then taken to the till, I was given the fabric for free as he said I was doing an amazing thing biking across the country. I made sure the man knew I was on a pleasure ride, not doing it to raise money or awareness for anything and he still said, it was mine for free. Such wonderful kindness!

Province number eight, Prince Edward Island – Before our group headed to Brian’s house, we all made a stop at the local quilt shop in Charlottetown. The shop was changing location so everything was 40% off. I picked up the blue buoy fabric here. As well, I purchased the backing and border fabric here. It is the light fabric that the letters are appliqued onto.

Province number nine, Nova Scotia – During our pot luck at the Lake Ainslie campground, I shared my story of purchasing fabric from each province to make a quilt when I returned home. Jeanie is a lady from the United States who lives about 3 miles from the campground for 5-6 months each year with her husband. She offered to run home and get me a couple of pieces of fabric to donate to my quilt. She brought me a pink and a green piece of fabric with the Celtic knot on it. The pink fabric is in both the quilt and table runner. I will use the green fabric for future projects.

Province number ten, Newfoundland and Labrador – When I rode into Clark’s Beach, Chris approached me and asked if I had purchased my fabric yet for NFLD. As Chris gets in early to each camp, he always looks up what stores are around. He showed me a quilt shop that was not too far from camp. Off I went. Upon my arrival to the shop, I found it to be closed. I went next door to a hair/nail salon and asked if anyone knew the owner. I told them I was after some fabric for my quilt. The owner’s daughter was there doing someone’s hair and she called her mom. After a little wait, the lady arrived and I was able to purchase the puffin fabric. I also purchased the bright red fabric you see in what are called the cornerstones of my quilt. I have also used it as the backing and binding on my table runner. It will possibly be the binding on the quilt as well.

3 thoughts on “Stitching Her Way Across Canada”