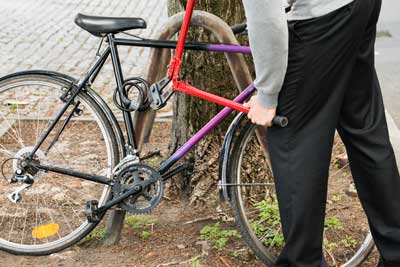 In 30 years of operating Tour du Canada and Cycle Canada tours we’ve had five reported bike thefts. We’ll share some of those tales and tips with you plus some further reading so your bike is where it should be, on the road with you.

The heist with most drama was in a small resort town in B.C. The theft happened after sunset and was discovered when one of the campers went to the washroom. It was a long night but after some sleuthing we did collar one of the young boys involved in a raid on our campground. We marched him home and to her credit his mother called the police. While we were talking to the police constable at the campground a young man in his 20s showed up in a souped up TransAm. It was an odd development and it soon became clear to us that this guy was known to police. The result was that some of the items that had been stolen were recovered, but not the bike.

We don’t know who the TransAm driver was but our strong suspicion was that he was a fence who ran a gang of juveniles that preyed on seasonal visitors to the town. In talking to the police officer we were told that the ususal destination for a stolen bike is that it gets dropped off a bridge at the edge of town that goes over a channel between two lakes. If the bike gets found it’s usually by a fisherman who snags it on the bottom of the channel. In this case the bike was not found right away and the rider had to get a new bike to continue her trip.

In mid-fall of that year the rider got a phone call from police in that town with a report that the bike had been recovered. And was in good condition. We don’t know how the recovery was made but it could be that it was the fence who finally made a mistake.

One lesson from the story is that bike thefts don’t always happen in big cities. But four of our five theft episodes were in large cities, so maybe that’s a reasonable ratio. Of the five only one was locked. That locked one was secured with a heavy-duty lock and attached to another bike. The lock was cut and only one bike — the more expensive one — was stolen. The fact that the lock was cut suggests it was done by professional bike thieves. In that case the rider was fully insured and bought a new bike that day to complete the day’s ride.

Another tale with a not-so-happy ending was told by a cyclist who had a bike mounted by the forks on a car roof rack. The cyclist had parked at the loading zone in front of a hotel. Check-in lasted less than five minutes but on return the bike was gone, except for the front wheel safely stored inside the car.

On Cycle Canada trips we provide orientation notes in advance of our tours, including tips on keeping your bike safe. We cover this topic again at in-person sessions before riders head down the road. Here are some tips:

With thousands of cyclists having completed our tours, taking breaks at hundreds of hotels, restaurants and stores across Canada, five stolen bikes is not a bad record, albeit unhappy events for the victims. But that low number is just one of the many reasons why Canada is such a great place to go for a bike ride.

Do you have other tips? Share them with us!

4 thoughts on “Keeping Your Bike Safe”